A really nice way to record and edit podcasts is to have each person speaking isolated to their own channel.  In my early days it was one microphone into a single recorder, so every one was on the same track.  However with the advent of the pandemic and the rise in remote recording, having separate audio tracks has actually become the norm.

One of the cool things about multi-track editing is that you can silence people when they are not contributing.  It is amazing how much background noise can be picked up when the person is not talking, chairs moving, coughing etc.  With each person on their own track, if they aren’t contributing the the discussion they can just be silenced.  It is a powerful tool, but it is usually to silence myself is where I use it the most.

So how does one edit multi-track audio in audacity?

In audacity it is very simple to drag and drop audio right into the window.  However it is very hard to guarantee alignment.  Typically I do it by eye, in general, where ever one person is talking there is space in the other where the other person is not.  Given how much delay there is on the internet, the audio that you are recording isn’t actually in sync with when the person is talking themselves, so it actually turns out that precision here isn’t as big a deal as you would think.

A Label track is a special insert track that is available in audacity that allows you to add some marker notes to. We will be using it here to bookmark between collections of audio tracks.  To add a new label track you can add it from the main menu:

Once tracks are aligned you can enable Sync-Lock, found under the main menu: 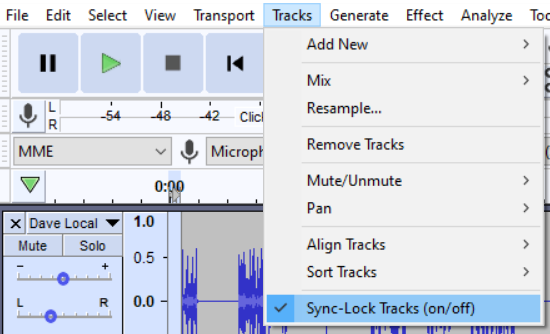 However, if you have some audio that you do want to move around relative to the main recording, this will need to go into its own section, with its own label track.

Here is an example of a recording that has two audio channels in the podcast in the main area and then the intro and outro audio on a secondary area.  Usually the outro needs to be moved after the edit to match up with the completion of the podcast. 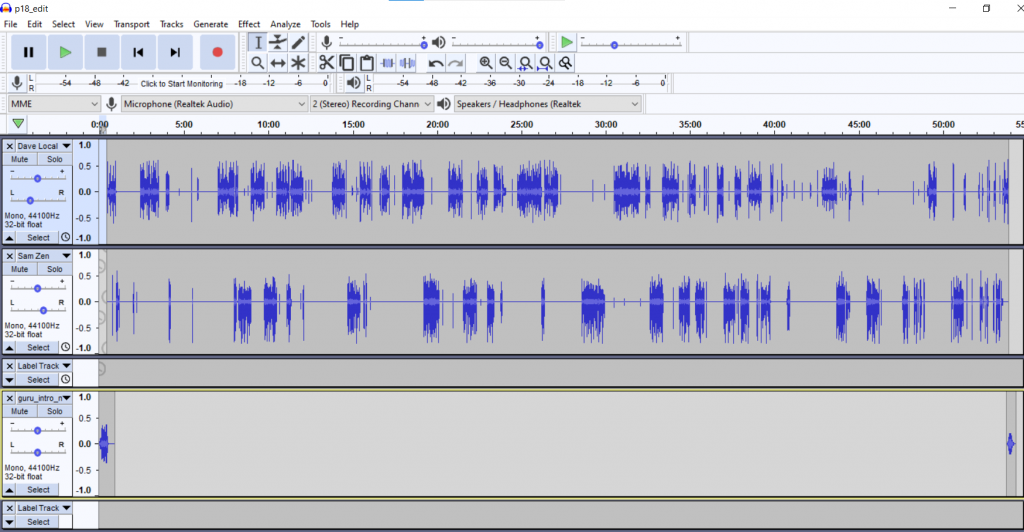 Note: if you have 2 chunks of audio, like in the into/outro track, if you need to place them on one track you may have to disable the sync-lock until they are in the same track.